I may be betting well ahead of myself here, as I still have so much to learn in the CAD side, etc,

But here’s my next questions

How do you/can you control the cut order of something? So, for example if I wanted to cut a sheet of circles, with a little circle off set from the edge (round decorations with hanging hole, cutting glass) - I presume it would be preferable to cut the inner hole before the circle - so that the whole piece stays in place? What happens if I am doing a sheet of say 10 circles with holes?

If I were doing shapes that butted up together perfectly - for ease, let’s say squares (although I can cut squares in glass quite well). Do each of the squares have to be individual shapes, or can they basically be one large square with a grid lines cut through separating the square?

Not sure if that makes sense. Think of something like a Rubik’s cube face. So rather than cut nine individual squares with spaces around all, can I cut one big square and then cut horizontal and vertical lines to separate it into nine? Avoid wastage (art glass is VERY expensive) and makes less cutting time.

Thank you for being gentle with me!

As for the cut order of operations - there is nothing to worry about! WAM will prioritize any inner features that are surrounded by an exterior edge first. If there are multiple features within a closed loop, WAM cannot prioritize one over the other so it may cut internal features inside the same loop randomly. 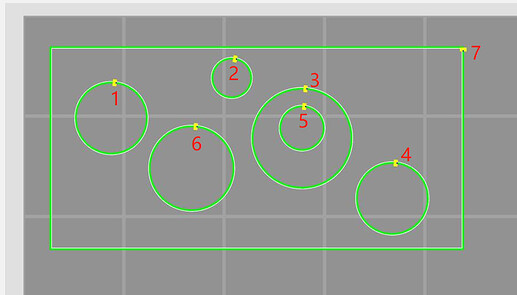 As a final note, I recommend using a tab on every single feature in the off chance that the object gets blown away and lost at the bottom of the tank, or gets loose and comes into contact between the nozzle tip and material - causing a backflow and clog issue along the abrasive system and failing the cut.

This is a great thought to keep in mind during the drawing in CAD. A lot of shapes (or the same object multiple times) may use the same line. In order for WAM to cut this same line only once, make sure the line is only drawn once in CAD.

With that said, if you have a Rubik’s cube and draw 9 squares - but put a single line of each square on top another line in CAD, that line is now doubled. WAM will read all lines drawn in the CAD file, no matter if it is only shown as one (stacked on top of each other). In order to achieve 9 squares without cutting the same line multiple times, draw a tic-tac-toe board (2 lines by 2 lines) and enclose the board with an outer perimeter. Essentially, it would be a big # sign. Hopefully that makes sense!

Sharing lines will save time, abrasive, and material! There are even fun nesting software and websites out there that will take all your imported shapes and optimize the layout to share as many single lines as possible. If you incorporate those nesting styles into your CAD drawings, you’ll be a pro in no time!

Perfect, this answer makes sense and actually I had a quick look at a question someone else had made about the order of cutting (it was a series of wavy lines with two vertical cuts, the suggestion was to offset the two vertical cuts by a very small margin so WAM classed them as outside lines and did them last.

So, I did a quick + sign, and surrounded it by a very slightly bigger square, and hey presto I cut four squares with only one pass on each inside edge (hoping that makes sense!)

Tabs on glass are a bit of an issue though, especially on something like a small hole, as smoothing off those tabs isn’t always as easy with a bit of glass!